Marking My Beliefs To Market

One of the many admireable things which Brad DeLong does is to mark his beliefs to market. I decided to do a bit of that. I realize that one very hard step is to find the markable beliefs. I decided to google [prediction site:rjwaldmann.blogspot.com] and got a few (including that Kerry would win in 2004).

Usually I use the word to refuse to make a prediction (especially after 2004) but I found a few.

Kevin Drum has written a lot about the lead causes crime hypothesis. I believe it was proposed by someone at the EPA in the 1990s a very few years after the peak of the US murder rate. I consider myself an early supporter (about as early as Drum even if much less industrious).

In April 2008, I predicted that the UK violent crime rate would peak some time around 2008 http://rjwaldmann.blogspot.it/2008/04/get-lead-out-in-freakiest-bit-of.html 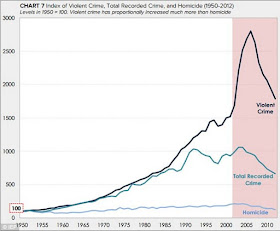 I'd say the prediction worked out pretty well.

Again and again, I predicted that the CBO forecast cost of TARP was higher than the expected cost of TARP and that the forecast would be reduced. I think the first time I did this was September 18 2010

Again and again I was right. The books were (roughly) closed with a reported non cost of over $15 billion of profit.

This predition worked out pretty well too.

On a much more minor issue, I predicted that the Public Private investment Partnerships wouldn't coast the US government, and in particular the FDIC, much money. This is interesting mainly because I challenged Joe Stiglitz, Paul Krugman, and (I just learn) Jeff Sachs. The books have been closed. The Treasury made a positive return of $ 3.9 billion. The rate of return was vastly greater than the rate the Treasury pays. Even assuming the 3.9 was earned all at the end the return would be 3.9/18.6 after 5.5 years so an annual rate of 3.5% compared to the Treasury 5 year rate of oh around zero.

4) Hmm turns out I predicted that Marco Rubio would not be the GOP nominee.

5) Huh it seems I predicted that George Bush would offer to nominate Patrick Fitzgerald to the Supreme Court and that he did in fact do so. Either or both of my prediction and this alleged Fitzgerald e-mail might be jokes.

à 6) Effectiveness of Quantitative Easing. This is tricky, because while I actually became a tiny bit known as a skeptic (I was actually interviewed by a journalist once) I flinched and said Abenomics had worked. Also I tended to argue that QE based on purchases of risky assets would work better than QE based on purchases of long term bonds. I think my first foray into QE skepticism was this on February 26 2011 . See also this. But I tend to claim some success. I am pretty sure I was relatively skeptical of QE. There were critics who thought it would work too well and cause hyperinflation, but I am fairly sure I was fairly far out towards the most extreme position of saying it wouldn't have much effect. This not really stuck to prediction is working out rather well.