One of the core principles of Liberalism is that there must be equality before the law. The law must not discriminate. In practice, this principle is often restricted to citizens and people are citizens only if they are born in the liberal polity or have the right ancestors. I personally consider this restriction absolutely inconsistent with my core beliefs.

In any case, equality before the law is a core principle. Liberals might consider equality of income very important or not at all important, but we must defend legal equality or else we are not liberals.

I naively imagine that I am pretty utilitarian. Consequentialist enough to accept Pareto improvements anyway. I reconcile my absolute respect for legal equality with my absolute respect for utils ideologically, that is by convincing myself that reality is such that I can hold both moral beliefs. In plain English, I am deeply convinced that legal equality is not just good in itself but also is the most efficient legal rule. I think that hereditary priviledge is not only wrong but also leads to incompetence in key positions.

However, I can imagine an alternative world in which a law which discriminates can cause a Pareto improvement. I am absolutely unwilling to name such a law clearly, because I consider it obscene. I will discuss the issue only in complete abstraction. The reader will have guessed that I am more liberal than utilitarian and would reject the Pareto improvement in the unhappy alternative universe.

The model is a case of the Matsuyama model (QJE 1991 vol 104 pp 617-650) built on the Murphy Shleifer and Vishny big push model and analysed by Herrendorf Valentinyi and Waldmann (ReStud 2000 Vol. 67 no. 2 pp. 295-307). This is a model in which different people leave villages where they farmed and move to cities where they work in industry. It is assumed that different people either face a different moving cost or have different productivity in manufacturing. This means that for intermediate values of the present value of wages in the city, some people move to the city and some stay on the farm.

The interesting dynamic arises because there are Marshallian spillovers or something (in MSV imperfectly competative firms with increasing returns to scale). Thus it is not wise to move to the city if no one else does. In an early draft of HVR 2000 Akos suggested considering congestion as well. In an unpublished draf, for very high urban populations, wages in the city decline as more and more people move to the city creating congestion. The math doesn’t change if this is a non pecuniary disutility of living in a crowded city. In the model all aspects of living in the city today are summarised by the “wage” which is the income which would give the same utility if earned in the villages minus the income which would be earned in the village. Clearly the "wage" is not just a wage. It is, at least, a wage differential.

Given the risk of congestion, it might be Pareto improving to restrict migration to the City. The model becomes evil, because it is also assumed that the state is inept and can only do this by choosing an arbitrary inate characteristic of people and restricting migration based on that characteristic. That is, the State can’t say you are allowed in the city if you moved here already because it can’t keep track of it citizens. Also it can’t tax and transfer because its employees are crooks or something.

People die at a constant rate and new people are born in villages so the population is constant. Babies are all somehow born in the countryside, because … well I forget why but it is a model meant to clarify thought.

It changes in a very simple way. For any n, there is a present value of “wages” such that n remains constant. The graph of this is called the

ndot =0 curve where ndot is the derivative of n with respect to time. For higher V (above the ndot =0 curve) n increases and for lower V n decreases. At n = 1, the ndot =0 curve goes to infinity. In the example in figure 1 it is horizontal for n close to 1 then becomes vertical.

Recall that the wage is really a differential between the value of income plus non pecuniary amenities in the city minus that in the countryside (randomly called “villages” farm and all sorts of things because this is a blog and I am the editor).

Another key variable is the present value of “wages” V. V changes according to Bellman’s equation, because it is a present value. This means that for any n there is a V such that V does not change which defines the Vdot=0 curve. Such a V is the “wage” dividied by the sum of the real interest rate and the death rate. Importantly present value has the property that if V is above the Vdot = 0 curve V is increasing. That is present values tend to be unstable. This makes perfect sense when you realise that in the present value equation with perfect foresite the future causes the present. (that was a joke).

ne possibility is to move out the unstable line and see what happens. Given initial n near the saddle steady state, this is pretty much the only alternative. Initial n and V minus saddle steady state n and V must be a linear combination of (delta n, delta V) on the saddle path and (delta n, deltaV) on the explosive path (because all vectors are). The equations are all linear for a large region around the saddle steady state in the example so you can think of these to vectors seperately. The one on the saddle path gets smaller and smaller and (n,V) gets closer and closer to the explosive path. Figure 1 illustrates this among other things. 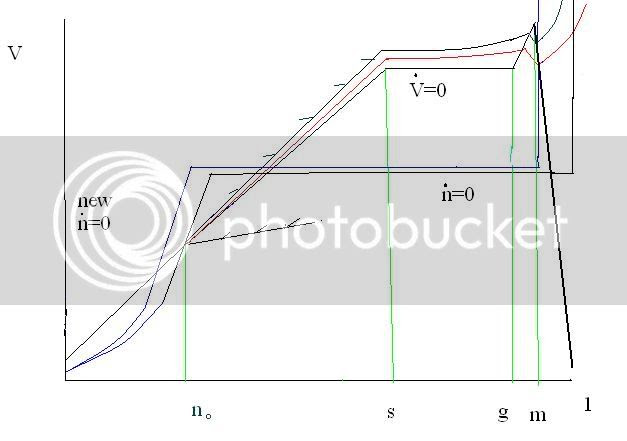 update: In fact it is possible to characterise the lowest explosive path with increasing V in (n,V), that is, the one with lowest V for given n. This lowest path is the one followed if the economy starts on the n dot = 0 line and hence above the Vdot = 0 line. If one starts with higher V, then V is higher for any n, since perfect foresight paths can't cross. If one starts with lower V but still above the saddle path, (n,V) moves up and to the left till it touches the n dot=0 line then up and to the right and passes over n_o above the n dot = 0 line, above the lowest explosive path with increasing V and stays above it. If V is below the saddle path , n goes to 0 and V violates the transversality condition. Figure 2 to illustrate this. 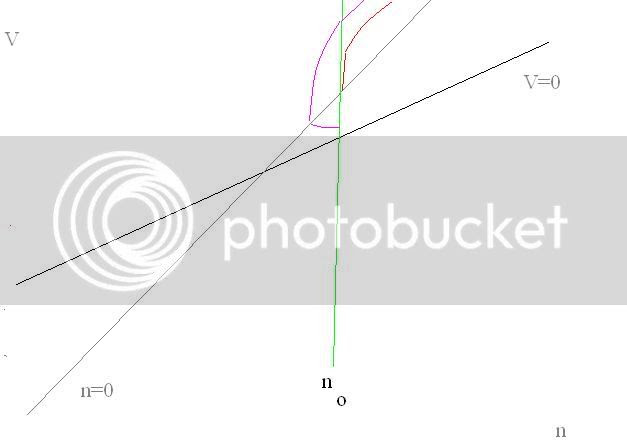 Figure 2 is a closeup of figure 1 near the saddle steady state. The red curve is the explosive path with increasing V which has the lowest V for any n. I have added another path, drawn in purple to show why this is the lowest such path.

Possible paths leading to steady state with higher n must be very close the explosive path. Weird assumptions about the “wage" can be made so that these paths cross the V dot = 0 curve but stay above the ndot=0 curve and are not on the Vdot = 0 curve at n = 1 (see figure 1). If n is not changing because everyone is in the city, V must be on the Vdot = 0 curve. Otherwise the transversality condition is violated.

No equilibrium with high n is possible because people don’t stop going to the city when the possible equilibrium path hits the V dot = 0 curve. Let’s say this happens at n =0.9. This good steady state can be reached, at the end of a perfect foresight equilibrium path, if one tenth of people chosen at random are forced to stay in the country side. The equilibrium is better than the saddle steady state for them too, because the relative price of food is high. The unspeakable policy causes a Pareto improvement.

OK all this depends on the figure which I will feebly try to explain. The red curve is the lowest curve whith increasing V for initial n n_0. The very key Vdot = 0 curve is hard to see. It slopes up from 0 to s as more people in the city help each produce (s for Solow or standard or something because after that, for a while nothing weird happens). At g the “wage” jumps up. This is like the late 90s in the US somehow with a growth spurt. G is for Greenspan or Glassman or Gilder or anyway someone who thought the tech bubble would last. At meverything begins to go wrong and society starts to collapse in the city. This is named Mathus or Marx or anyway someone gloomy. So the Vdot =0 curve slopes up, goes flat, slopes up steeply then slopes down very steeply. If congestion problem went critical very suddently, the V dot curve could jump down and wouldn’t be continuous. In this case the saddle path to the saddle steady state (low n steady state) could be the only equilibrium.<

The blue curve is the n dot = 0 curve with the discriminatory policy. The policy is descigned so that it stops urbanisation just before (or just after) congestion kicks in. It makes the red curve an equilibrium path. The new blue ndod=0 curve and the old black ndot = 0 curve should be superimposed when they are horizontal. The policy shifts the ndot =0 curve n/10 to the left because 10% of migration is banned.