Someone should write a book "Economic Theory: What Went Wrong". You had a draft in your mind some years ago. PseudoDeLong wrote that economics had been healthy, although inevitably influenced by ideology. In the good old days, there were fruitful debates between libertarians like Friedman, Stalinists like Sweezy and everyone in between.

Then Lucas and Prescott made a mess of things, abandoning evidence for pure theory. Or rather, they made a non mess of things, focusing on their favored models and ignoring non messy reality.

This is an attractive story, but it does not correspond to the actual history of what was actually written and said. It is, roughly, salt water good, fresh water bad. Fresh water means both back engineering theory from free market policy preferences and favoring rigorous analysis of the implications of absurd assumptions both to common sense and to empirical rigor "progress don't regress" "Theory ahead of business cycle measurement".

The problems are (at least) two. First the fresh/salt division isn't identical to left/right. The terms were introduced by Hall a salty conservative. Sargent and Hansen are distilled water center-lefties.

But second, many salty lefties manage to be almost as receptive to actual evidence as Prescott. You present an example. I think Friedman is another. Actually Lucas himself is a brilliant rhetorician -- he can do it with words as well as with equations.

They are on the same team with teammates named Laffer, Kudlow and Moore. They are (or sadly were) geniuses, but they work back from the conclusion and are more loyal to small government ideology than to their stated methodologies. This must be true, because they consider themselves part of the same school even though they have opposite methodologies.

I think it might be time for an update on the crudest of tiny sample reduced form analysis of fiscal policy and the current recovery.

One reason for my continued interest is that there was a rather large tax cut enacted in 2017. Trump critics tend to argue that it failed to encourage investment, but did affect aggregate demand. I wonder if the noticeable increase in GDP growth is due to the tax cut or the spending increase from the 2017 omnibus spending bill.

So I look at GDP and G (government consumption plus investment) again. Both are annual changes in billions of 2012 dollars (Not logs). I subtracted 400 billion from the change in quarterly GDP (multiplied by 4 to give an annual rate). Also I multiplied G by 1.5 which is a common estimate of the multiplier (say by Blanchard and Leigh Nakamura and Steinsson). Here an effect of the tax cut would appear as an anomaly -- an increase in GDP not fit by the change in G times the multiplier (or the $ 400 Billion and year trend). 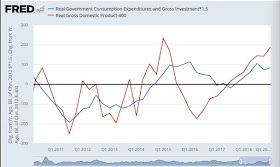 I do not see an anomaly either when the tax bill passed in 2017 or in 2018 when tax witholding changed. As I mentioned back in 2014 I don't see an anomaly in either growth or government consumption plus investment when sequestration started in 2013 q1. The anomalies are high growth from 2014 q 1 to 2015 q 1 then low growth from 2015 q1 and q2 to 2016 q1 and q2, that is a level anomaly at a time when there weren't policy shifts.

I notice again that theory and data both suggest that changes in G are more important than changes in taxes. Nonetheless the practice is to measure the fiscal stance with the full employment budget deficit, that is, to assume that the balanced budget multiplier is zero.